Acunote (YC W11) launches project management for software teams of 2 to 10,000 with a live Gmail-like interface 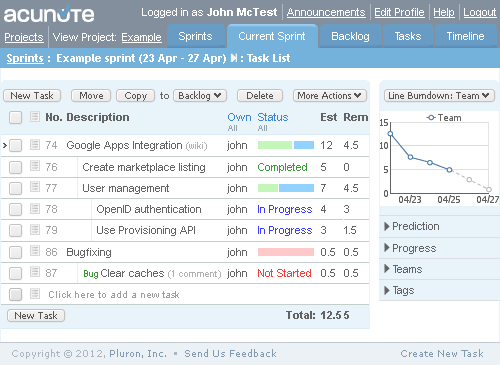 “On time and under budget” is manna from heaven for project managers the world over, but unfortunately for most of them, those working on the projects and those commissioning them, it’s not often the case. Now, a Y Combinator alum (Winter 2011 class) called Acunote is launching a new project management system that wants to change that — by offering a platform to help people manage their tasks better.

With real time updates and a simple interface that bears a loose resemblance to Google’s Gmail, Acunote is making it a lot easier and quicker for people to update what is going on (and what is not) in a project. And it’s setting its sights on taking that to the next level with features to make it much more collaborative.

Acunote is formally launching now, but it’s actually been operating quietly for much longer, and already has an impressive list of clients on the platform. They include IBM, Fujitsu, VMWare, Eclipse, HP, EMC, Disney, Bump, Bank of America, and the FCC, who use Acunote to improve communication around assigning, organizing and completing tasks. That not only helps people work more efficiently — but it helps manage expectations for teams of workers when projects do hit a snag and get delayed.

Gleb Arshinov, the founder and CEO of Acunote, tells me that customer feedback so far has focused on how quick it is to use Acunote. Keyboard shortcuts and the simple interface, he says, makes it virtually “as fast as the speed of thought”.