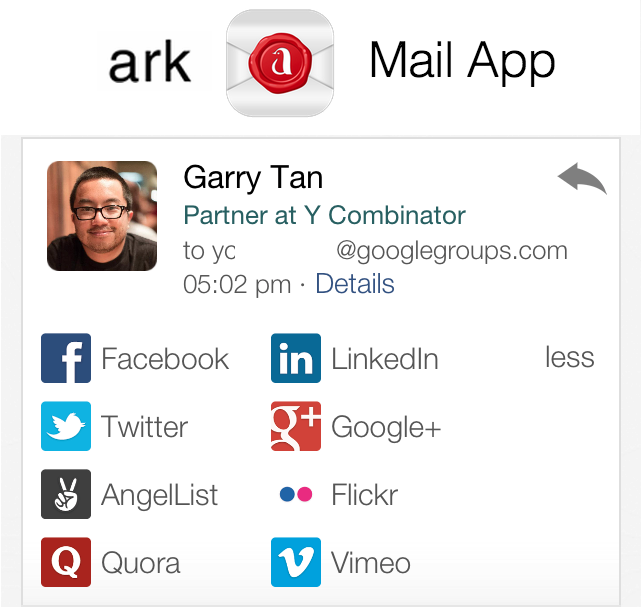 Need to do some homework on who you’re emailing? You could search their name on Google, Facebook, or LinkedIn, but on mobile that’s a lot of taps, and it’s hard to know if you’ve got the right John Smith. So Ark has just launched a mobile email client that pulls in all the social profiles of the people you’re emailing so you can quickly do research on business contacts or stalk your friends.

If the Ark name sounds familiar, it’s because the company launched as a people search engine on stage in the TechCrunch Disrupt Battlefield in May 2012. Soon after it raised a huge $4.2 million seed round. The Ark people search engine let you pull up all your friends who live in New York, who are single, or who Like the same band as you. It was built on Facebook’s data and worked a bit like the yet-unlaunched Graph Search…which ended up being a problem. Facebook shut off their access for using people’s friends data in ways that stepped on its policies.

Without its core data set, and with the eventual launch of Graph Search, Ark needed to find a new way to add value. So it’s announcing its pivot into marketing intelligence.

The problem it wants to solve is still in people search, but from a new angle. “When I search your name in Google, it goes ‘I don’t know [who you are], here’s 10 links,’” says Ark CEO Patrick Riley. “We wanted to resolve those entities…consolidating all your profiles into an uber-profile between multiple social networks.”