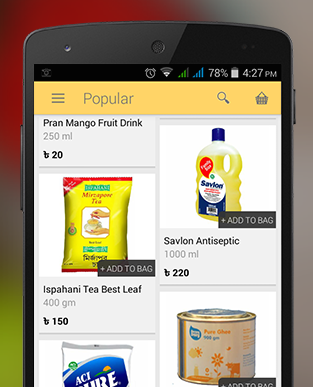 Chaldal is a startup launching out of our current class that’s built an on-demand grocery delivery platform that serves Bangladesh, one of the densest countries in the world.

Chaldal’s service, which is currently active in the capital city of Dhaka and plans to expand to other cities in the future, offers the product variety of a big box store, compared to the limited selection often offered at Bangladeshi markets, which are typically short on space.

“Chaldal was founded by Waseem Alim, Tejas Viswanath, and Zia Ashraf
in 2013. After working in product development for Wikinvest and SigFig,
Alim began exploring the possibility of launching a startup in his home
country. He was galvanized by the collapse of a garment factory near Dhaka that killed more than 1,100 workers.

‘That jarred me and made me think, if capital is being invested in a
way where people have to work inside a mousetrap, then I want to see
what it takes to really make a living in Bangladesh,’ he says.

Consumers in Dhaka often purchase small amounts of groceries,
regardless of their income level, because shops don’t have a lot of
stock. Chaldal’s current business model centers around warehouses that
are relatively small (about 5,000 to 7,000 square feet each), but still
enable it to carry much more items than brick-and-mortar retailers. It
uses a cloud-based inventory system that allows users to see what items
are available in real-time.”