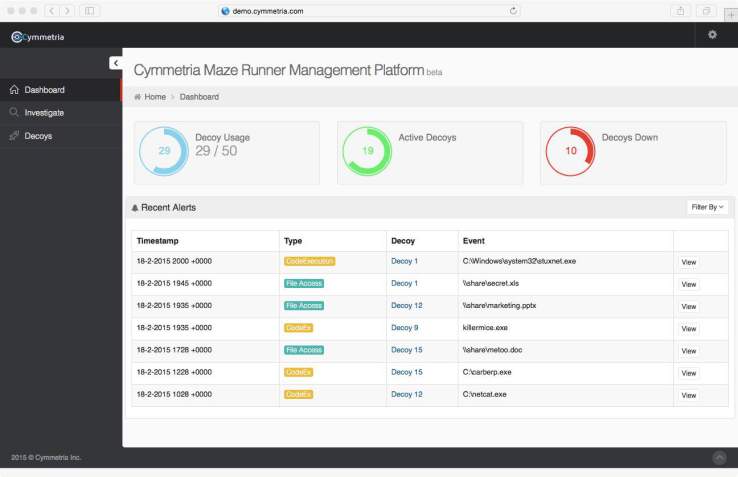 Cymmetria (YC S15) is launching out of the Summer 2015 batch of Y Combinator.

They are building an enterprise security system that puts attackers in a rat maze.

Today, security solutions are either signature based (they look for known attacks) or behavior based (machine learning extracts info from big data). These solutions are static — you build a system in advance and wait for an attacker to reach you. These solutions put defenders in an endless game of cat and mouse, where the attacking side has complete situational awareness, and defenders have none.
Strategically, there is no reason why the defenders shouldn’t have the “home court” advantage, and this can be achieved by the deployment of decoy technology.
Cymmetria is building a system that can shape an attacker’s behavior by leading them toward decoys. You can read more about Cymmetria on TechCrunch:

“Their focus is APT attacks. Aka: advanced persistent threats — where attackers, perhaps State-sponsored, are aiming to get into a network and lurk undetected for a long time in order to steal large amounts of data.

‘The first value proposition is essentially one alert — one critical alert,’ he (founder Gadi Evron) says, explaining how Cymmetria works. ‘Current solutions generate thousands upon thousands of alerts every day. We generate one because our decoys are real machines and nothing should run on them except for what we put on them. Which exactly means that if anything now runs on that computer that is not ours that is a 100 per cent indication there is an attacker now in the network. There are no false positives.’

At that point Cymmetria also performs forensic analysis on the attack, and offers an action plan on how to mitigate it — using a company’s existing systems and security infrastructure, with which it integrates.”

Cymmetria is founded by Gadi Evron, Dean Sysman and Ran Harel. Gadi worked as VP of Cybersecurity Strategy at Kaspersky, headed PWC’s Cyber Security Center of Excellence in Israel, and led the Israeli government Internet security operation. He sits on advisory boards with the Cyber Threat Intelligence Alliance and the Israeli CERT. Dean was formerly an officer and commander in unit 8200 in Israeli military intelligence. Ran was formerly a senior expert for a nation-scale cyber defense system and has over 10 years experience in enterprise security including global banks and financial organizations.