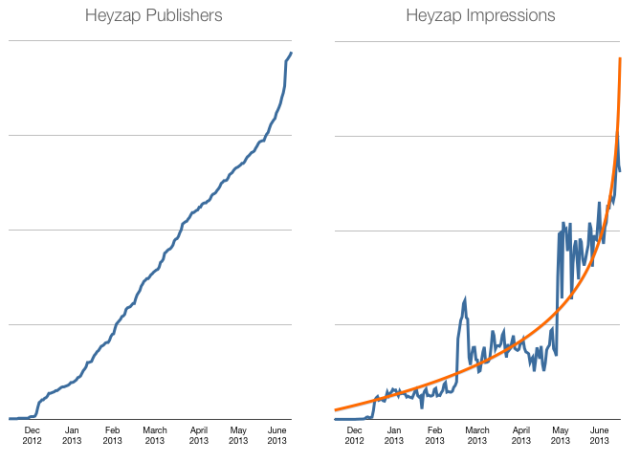 Back in March, I wrote about how Heyzap was introducing advertising to its mobile gaming platform. Now co-founder Jude Gomila says the company has become a significant player in mobile advertising.

Specifically, Gomila sent along the chart showing the growth in publishers running Heyzap ads and the corresponding growth in ad impressions over the past six months. You can’t tell exactly where things stand now, because there’s no Y-axis to the chart. However, Gomila did note that Heyzap ads are now running in 800 games (it was 350 in March), and that number is also growing quickly. He also said that the publishers advertising with Heyzap include big names like Zynga and DeNA.

In the six months since the program launched, ad revenue has grown to the point that it already makes up the majority of its revenue. As a result, Heyzap is looking to expand its team beyond the current 25-person workforce.

Read the full article in Techcrunch