Hipmunk Anywhere launches—easily search from desktop, book on mobile instantly, which 60% of people do already 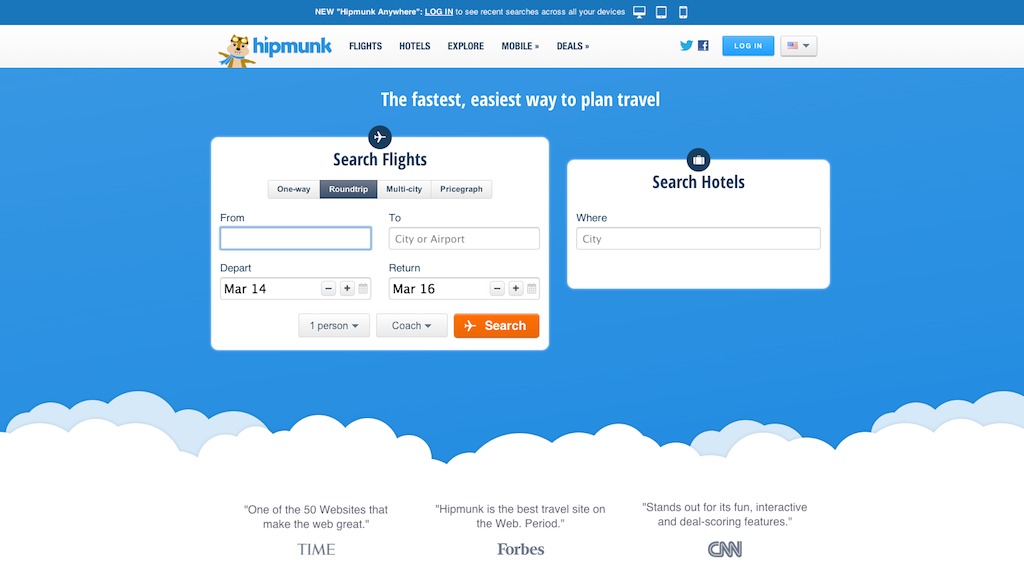 Hipmunk Anywhere Brings All Your Searches to All Your Devices (skift.com):

Travel companies are well aware of what’s been happening with travelers’ search and booking behavior — they search on one device, get back to looking around later for a flight or hotel multiple times on myriad devices and operating systems depending on convenience or whim, and ultimately end up booking the trip most often on a tablet or desktop.

Consumers usually have to restart their searches when switching devices, but now Hipmunk and, to a lesser extent, Expedia, are doing something about the search inefficiencies of cross-platform habits.

Flight and hotel metasearcher Hipmunk has launched Hipmunk Anywhere, which enables users who are signed into its desktop or mobile apps to find their recent searches on each device regardless if they initiated them on the desktop or mobile Web, Android or iOS apps, or tablets.

Hipmunk CEO Adam Goldstein says co-founder and CTO Steve Huffman took the lead on Hipmunk Anywhere, which was “a lot of work,” but built in a couple of months. There’s all kind of layers to the feature, Goldstein says, including logic about the user’s location, and of course the previous searches won’t be visible if the dates of the prospective flight or hotel stay have already passed.

“It’s a pretty significant shift and no one else in the industry has really been paying attention to the way that people are actually using these different devices,” says Goldstein, adding that comScore found that 60% of consumers launch searches on one device and then finish them on another.