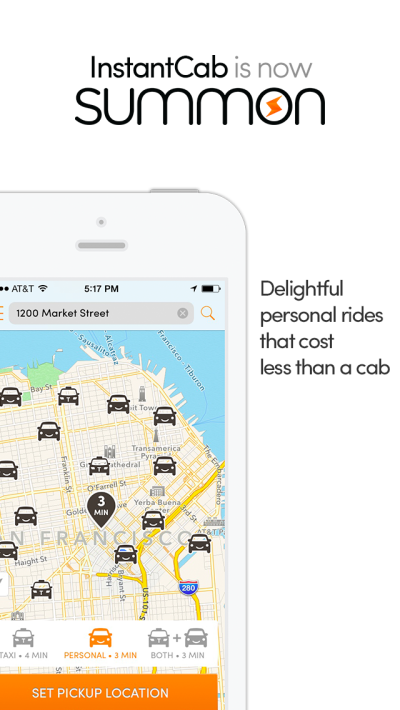 San Francisco-based InstantCab has raised some new funding, which it plans to use to expand into new markets. But first, the company has rebranded its service as Summon, and is announcing a new app and lower-cost pricing scheme for rides from “personal drivers.”

Summon is one of the newer on-demand transportation startups that have emerged over recent years, competing with companies like Uber, Lyft, and SideCar. Launched in the San Francisco Bay Area, its differentiating factor was a sort of hybrid approach that combined the ability to hail either a taxi or a peer-to-peer ride share driver.

For taxi rides, Summon charges a $1 fee over the amount that a ride usually costs. But personal drivers cost up to 30 percent less, based on per-mile and per-minute rates. That price comes after the company issued a pretty significant fare reduction for personal rides a month ago.

One other way that Summon hopes to differentiate is a lack of surge pricing on its rides. While Uber recently lowered rates, regular users have noticed that there are significant increases in the cost of fares during rush hour and other peak times. Even Lyft has implemented its own version os surge pricing, which it calls Prime Time Tips, to have more driver supply on the road during peak times.