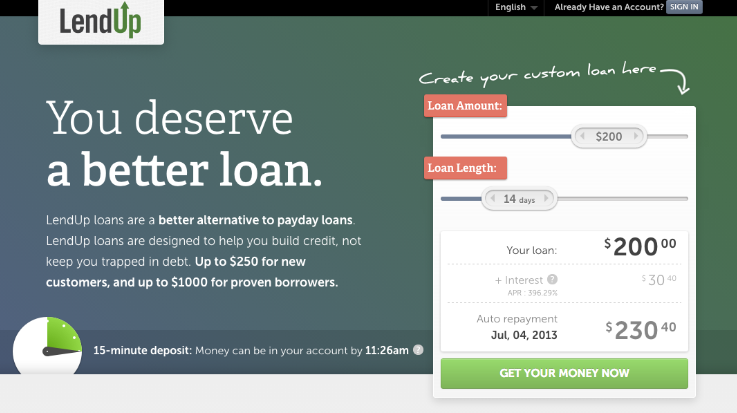 Y Combinator-incubated LendUp launched in October with backing from Kleiner Perkins, Andreessen Horowitz, Google Ventures, Kapor Capital and others, to bring a fresh solution to an old problem: You have to pay your bills now, but you don’t have the money to pay them. Rather than turn to predatory lenders and banks, with their high interest rates, borrow money from friends or cover your eyes and hope they go away, what do you do?

It may seem like a situation that only befalls the chronically irresponsible, but in fact, 15 million Americans turned to payday lenders to borrow money last year. Instead of ending up saddled with long-term debt from hidden fees or wrestling with Draconian terms and costly rollovers, LendUp wants to give those looking for a speedy fix to a short-term financial conundrum a way to borrow money without hidden fees, costly rollovers and high-interest rates.

The lending space at large has begun to brim with startups — like BillFloat, Zest, Think, Kabbage, On Deck and Lending Club — each of which is trying to make it easier for consumers and small businesses to get access to capital without having to jump through a million hoops. LendUp, in contrast, is positioning itself as a direct lender, using technology and Big Data to allow consumers with poor or no credit to get access to small-dollar, short-term loans (of up to $250 for 30 days) and build their credit while doing so.