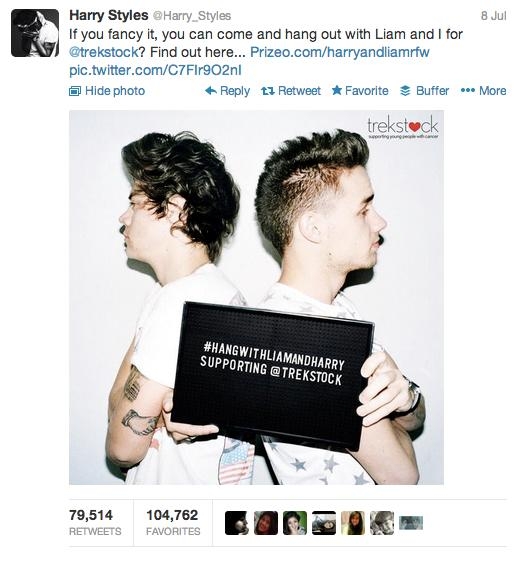 The friendly faces of boy band stars can help sell a lot of things: mp3s, arena seats, magazines, television advertising… But redirect that commercial power towards a charitable cause and the effect is just as strong apparently.

Prizeo, a Y Combinator startup that traces its roots to England’s Oxford University, manages the charitable campaigns of celebrities like Muhammad Ali, Khloe Kardashian and Samuel L. Jackson. The company relies on a raffle model where contributors get a single entry for every dollar donated, the grand prize being an in-person experience with the sponsoring celebrity.

The campaign page attracted 1.4 million views and 240,000 shares across Twitter and Facebook while the above video was viewed 445,000 times. The hashtag #hangwithliamandharry trended #1 worldwide on Twitter at one point. “It was absolutely invaluable,” says Sophie Epstone, Trekstock’s CEO. “We had no idea how much the campaign could raise.” In six weeks, the Prizeo effort raised more money than Trekstock had raised in the previous year. The non-profit’s Twitter followers jumped from 20,000 to 187,000, and it signed up 6,000 new ambassadors, each of whom promise to raise at least an additional £10.

“You can’t have a really successful campaign without a really strong fanbase,” explains Prizeo founder Bryan Baum, 24. “But the trick is taking that campaign from $50,000 to $800,000.”

Read the full article at Forbes