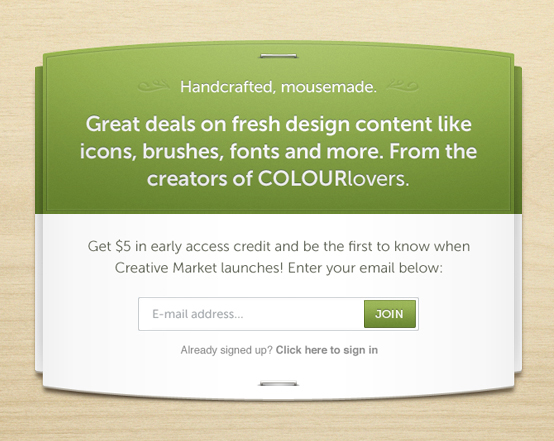 If you haven’t heard of COLOURlovers, you’re probably not a design fiend. Judging by its traffic growth over the past seven years, however, it’s built a pretty loyal following among its one million right-brained registered members. The Y Combinator grad also counts community-building experts, like Matt Mullenweg from WordPress and Alexis Ohanian from Reddit, as angel investors. They joined Founder Collective, Charles River Ventures, 500 Startups and others in a $1 million seed round last March.

Today on the company’s blog, “Chief Lover” Darius A. Monsef IV (who goes by the name Bubs and founded the site while still working at Microsoft) announced the private beta launch of an Etsy-like exchange called CreativeMarket that will enable its users to share and sell their “mousemade goods” like patterns, shapes, photos, fonts, and gradients. Although the team works remotely, co-founder Aaron Epstein, the brains behind ColorSchemer.com which eventually merged with COLOURlovers, lives right here in New York. “We’ve been trying to get as many New York people as possible,” Mr. Epstein told Betabeat.

With this new product, COLOURlovers is boldly making the world a more well designed place. If you’re a designer, they’re a must-watch website for 2012.