The fastest shipping for online shopping

E-commerce logistics solution for e-commerce in Latin America Buy online and receive it in less than 99 minutes, same day, next day or choose our new green delivery with zero emissions, You buy we deliver, within 52 cities in Mexico, 6 in Chile, 6 in Colombia, and 4 in Peru already operating and growing. Flat rate, live tracking, flexible routes, and plugins for every e-commerce. 99minutos: Delivery Fulfill99: Fulfillment centers Ruta99: Saas for routing solutions Punto99: Pudo network 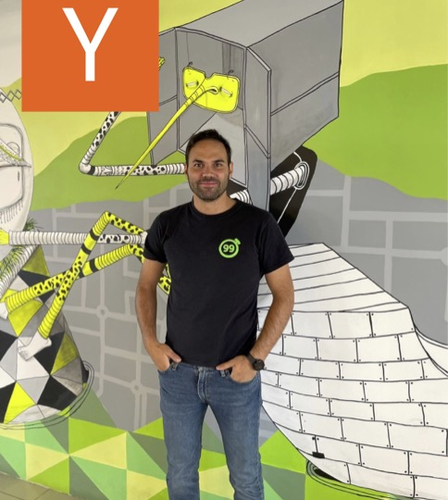 99minutos idea came when 2 friends and I went to a hookah bar and have some beers. When we got there they told us they ran out of charcoal for the hookah, so we said “We came here for that, is there anywhere we can order and receive it now?”, that is when we realized that the concept of fast delivery for e-commerce didn’t exist not only in mexico but in the world. So next day we launched an e-commerce store called 99minutos where anything you bought there got delivered in less than 99 minutes within mexico city. A couples of months later my 2 friends left the company so i remained as solo founder and the pivot the company, got rid of the e-commerce and focused only in the delivery.

How did you decide to apply to Y Combinator? What was your experience applying, going through the batch, and fundraising at demo day?

Applying to YC was game changer for our company. We applied for W20 even though the company had already 5 years up and running, at the time the company’s value was much higher than the 7% that YC gets if you enter. But at that time as Latin founder it was nearly imposible to raise more than 2M in mexico without external or US funds, so getting in was a strategy to gain traction with VC’s that had more than 2M.The batch was amazing, the group and mentors where great and we raised 5M that we needed in 3 days out of zoom calls and SAFE’s which was absolutely surreal for me.

How have you kept in touch with the YC community and continued to use YC resources & programs since the batch ended?

We have several chats where all the companies are and everybody get’s in touch through there. Quite easy

What's the history of your company from getting started until the present day? What were the big inflection points?

We started as an ecommerce 8 years ago trying to solve quick delivery but the ecommerce was the seller that we needed to offer fast delivery, the we decided to get rid of the ecommerce because it was already a market difficult to compete in. We started creating all the technological advances in a delivery experience that non of the huge delivery companies have not even today. 1 year later after creating the base for the company we received a 1M investment from a logistic consultant company…. this is a long story but to make it short we almost went bankrupt for 3 years due to this investor until in 2018 we were able to buy our shared back from them and that is when the company really kicked off. For me those 3 years were the years i most learned of my bad decisions, but it helped the company have great margins due to the fact that our investor was going bankrupt and couldn’t pay us for the sales we made. So 2018 the company grew to chile, started opening more cities and not only operating them locally but also connecting them. 2019 we tried to raise a 5M round already selling more than 5M a year and having positive ebitda, but back in 2019 there where no international investor or at least active for mexico so it was very difficult to raise money, we decided to apply to yc and got in. We raised 5M in 3 days in Safe’e something that was really new for us. 2020 we continued our growth, 2021 we raised 25M from kaszek and Prosus, opened 4 more verticals: fulfill99, ruta99, punto99 and Cash99. 2022 we raised 82M from Oak hcSo now we have operations in 4 countries, more than 70 cities combined, more than 8k employees, still growing 3X every year .

What is the core problem you are solving? Why is this a big problem? What made you decide to work on it?

Have a prime experience in any logistical solution from your ecommerce. At first is was just fast, cheap and reliable, when we launch the average delivery time in mexico was 12 days. Now most companies have fast delivery but 99minutos give the entire logistics circle for ecommerce so you can give your customers a amazon prime style delivery without selling in those marketplaces. Where we will handle their inventory, delivery in hours, full visibility, more drop off pick up points than all delivery companies combined, we offer cash on delivery, saas for routing tools, etc.

What is your long-term vision? If you truly succeed, what will be different about the world?

Being the best ecommerce logistics solution in latin america. When we succeed we will have first world solution for a 3rd world coountries.