Vikrum Nijjar joined as the first engineer at Firebase, and did whatever it took to help the company succeed: scaling out infrastructure, shipping mobile SDKs, hosting 1-1 office hours with developers and even standing in as SRE for 24×7 hour shifts… for over a year.

If you’re looking for your next job, visit YC’s Work at a Startup to find engineering roles at over 500 funded YC startups.

Ryan: Firebase (S11) is such an integral part of so much internet infrastructure — every developer seems to have done something with it. What was it like being so early on there?

There’s so much I got to build, it was incredible. In the early days, I started by working on improving our engineering rigor and automating our deployment process. We were thinking about scale from the start — we already had customers, and knew it would be big. At one point, we needed to pick good technology for the infrastructure, and I had lots of experience working with JVMs, so we picked Scala. We also knew Scala would help us attract good candidates, which it did. From there, I got to build the networking layer too, and wrote the first iOS and Android SDKs. At a startup, you get to contribute to just about everything.

Then about two weeks in, James comes to me and says, “Who are all these people coming into our office?” I told him what I did, and he just said, “Keep it up.” I mean, our customers were developers, and we want them to be super successful. And this was like having office hours in college. It was also a great way to engender trust with our users, and to get feedback on what’s working and what’s not working. And you know, do things that don’t scale.

Developer tools have these 2nd and 3rd order effects. It’s really endearing. There are — I kid you not — people who have found out I worked at Firebase and have told me, “Firebase changed my life.” I once met a guy who used to be a waiter at Applebees, went to a hackathon and learned Javascript and Firebase, and then won the hackathon. He ended up sticking with it, getting into tech and now he’s a PM. He never thought he’d be out of the food service industry, and — just to think that Firebase was part of his story — is really amazing. At one point, we had a tweet posted on our wall, “Please marry me, Firebase!”

The support from @Firebase is incredible. I loved them before, but right now I’d almost marry them. Highly, highly recommended. #StartupAUS

Our highest order bit was to hire kind people. Obviously we wanted people with the right skills and ability to communicate, but James and Andrew went out of their way to make sure they didn’t hire jerks. We also made sure we hired people who enjoyed coming to work, and whom we enjoyed working with. That’s really important to look for, because each person you add to the team changes the dynamic — for example, if you hire somebody more introverted, it changes the team’s communication style.

I originally found their job post on Twitter. One of the founders put a description on HackerNews and then tweeted it. I cold emailed them, something like “I saw your post, I’m winding down my startup, and I want to join a good team.” At the time they had customers and revenue — two things I didn’t have with my own startup.

Anyway, they asked to meet, so we got coffee at the Creamery, and it was pretty casual. We did an onsite about a week later, and then a small take-home exercise. Not as taxing as what we had at Google, and I got to get to know them better in the process. I’m a strong proponent of interviews being bi-directional — candidates should take the time to really get to know the startup, founders, and team. And I vividly remember James letting me list out all the things I expected culturally. That meant a lot to me. And it turned out he was really listening; even on the toughest days, we still took time to take lunch together, walk around SoMa, and enjoyed every step along the journey.

Definitely. When I applied to YC for my startup Gold Fig, I reached out to Andrew and James and told them about it. They were both incredulous — “No way you’re getting in.” But they still spent time with me, and gave me strong recommendations. That was key, because I had only done a bunch of mocks and hadn’t written that much code at that point. Getting their input on what I was working on and my YC application was huge. 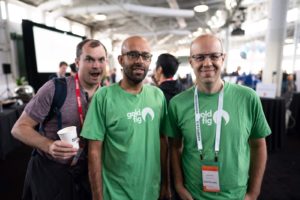 Yeah, we thought about that a lot. We have the network, and we feel pretty comfortable building a product. And there were some key things that we thought we really wanted. First, because Gold Fig is a developer tool, we thought that it’d be useful to tap into the YC community to get early users — just like Segment and Stripe did. And second, we wanted to use HN for recruiting engineers, because both me and my co-founder found Firebase that way.

Employee #1Founder StoriesInterviewWork at a Startup

What startup hiring looks like in 2021 — and during a pandemic