May Mobility was founded to solve a unique challenge facing the world today; an imbalance in access to mobility within the backdrop of increasingly congested cities and towns. The result is a company that uses technology to create a better, cleaner and more accessible way to get around.

Edwin Olson is the co-founder and CEO of May Mobility, Inc., an Ann Arbor-based startup that develops self-driving shuttles. Olson earned his PhD from MIT in 2008 for work in robot mapping. Olson has worked on autonomous vehicles for over a decade, including work on the 2007 DARPA Urban Challenge and vehicles for Ford and Toyota Research Institute. Most recently, he was named "Entrepreneur of the Year" in the Michigan and Northwest Ohio region by EOY Awards. 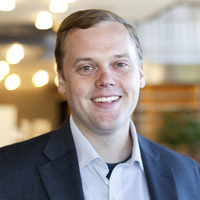