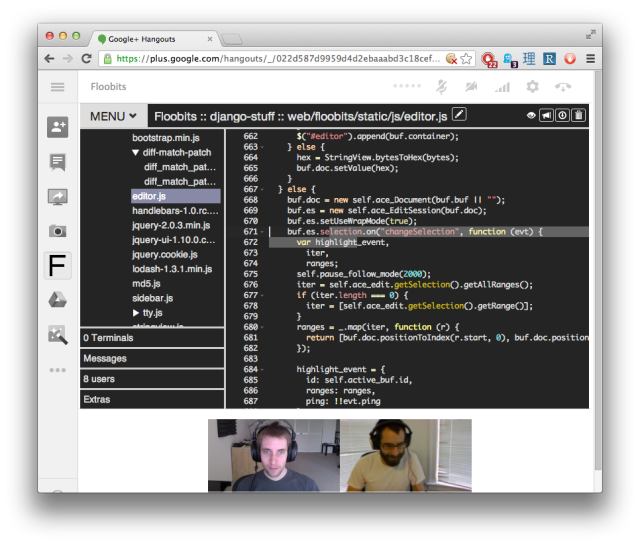 Y Combinator-backed Floobits, a new startup allowing two people to write software at the same time on the same codebase — known as pair programming — is officially launching today to help better connect remote developers and distributed teams. What makes this company’s implementation interesting, however, is that instead of requiring developers to use a web-based editor as manypair programming solutions today do, Floobits users can pair program directly within the text editors they’re already comfortable using through the installation of plug-ins.

And for those who do prefer to work via an online editor instead of a native one, Floobits has integrated its web-based editor with one-click access to Google Hangouts for chat, audio and video conferencing.

Meanwhile, on the native side, the company currently supports plug-ins for Sublime Text, Emacs, and VIM. However, Floobits’ founders admit that some of these plug-ins work better than others at present, with Sublime Text being the least buggy, and VIM being the most difficult. In fact, the company may launch its own version of VIM in the future, as there were a number of “workarounds” (read: hacks) needed to make Floobits work.

Floobits was officially founded this February by former Rackspace engineers Geoff Greer (who came in viathe Cloudkick acquisition, and who built this) and Matt Kaniaris. But in reality, they’ve been working on the idea since last August — and yes, often via pair programming.