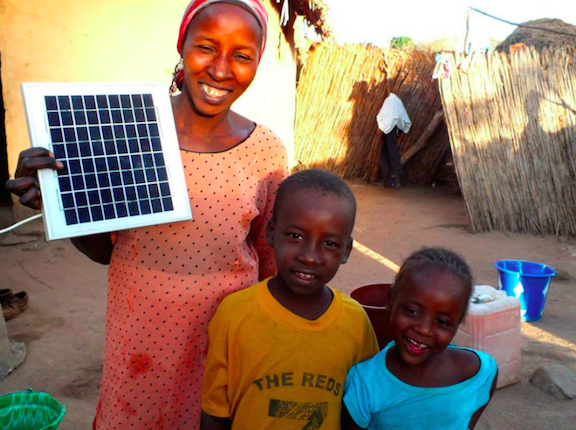 Though West Africa has some of the best conditions for solar power on the planet, the penetration of solar home systems in the region is extremely low — and some 150 million people in West Africa are currently without any electricity at all. Families in off-grid West Africa are forced to use expensive, poor quality lanterns and flashlights or dangerous candles and kerosene to light their homes. Often, residents travel many miles just to charge their cell phones.

Oolu is a startup in our current class aiming to change all of this, by renting solar home systems to off-grid families in West Africa at a rate nearly all can afford to pay.

“Oolu’s in-home solar system is composed of three adjustable lights and two USB plugs, powered by a battery that holds a charge for up to six hours with maximum output. For a low monthly fee, Oolu will install the system and perform all necessary maintenance, including free battery replacements and system upgrades.

… Oolu’s innovation isn’t the technology behind the solar products that they’re dispensing. The systems are produced by a large manufacturer, and similar products are already being used in areas of East Africa.

Instead, the company’s true feat is setting up a distribution model and payment infrastructure that West African families and community leaders are comfortable with. Oolu has partnered with Orange Money, a Senegalese money transfer company, so that customers can pay the monthly subscription fee from their mobile phones.

‘We’re working with Orange Money to bring not only solar, but also mobile payments and mobile banking to millions of rural people,’ says [Oolu co-founder Daniel] Rosa. ‘People talk about a solar revolution, but really it’s a solar mobile revolution.'”